Momal Sheikh is a beautiful Pakistani film and drama actress with an innocent face. She is the daughter of a famous actor and director of the Lollywood and Bollywood industry Javed Sheikh. She entered in the Television industry in 2008 from drama serial Yeh Zindagi ha. Momal Sheikh is a really beautiful and graceful lady with decent acting skills. She is very unique in her own way as she wears unique clothes designed by many Pakistani brands. Here is a complete bio of Momal including date of birth, education, and career history as well as her drama list. 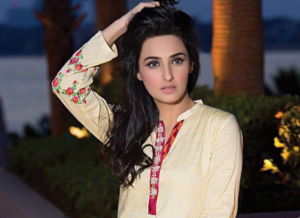 She is graduated in marketing and advertising from London University before it she completed A-Level from Pakistan. She is one of those showbiz stars having higher education.

His father is a famous actor in Pakistan Javed Sheikh and his mother is Zinat Mangi. His brother’s name is Shehzad Sheikh.

Momal Sheikh gets married to Muhammad Nadir in 2012. They have a beautiful baby boy whose name is Ibrahim.

Momal didn’t have any plan to come to the showbiz industry that’s why after completing her education in the marketing field she started work in Bank Management. Momal never thought to enter in the showbiz industry and his father didn’t insist on her to enter in the showbiz industry. After her marriage, he thought to act in Pakistani dramas. When she entered showbiz she does not want to get the name by the favor of her father but on the basis of her own talent. According to her, I am not progressed but progressing soon I will make a big name in showbiz on the basis of my talent.

As she is a daughter of Javed Sheikh who is a big name in the Pakistan television industry that’s why she didn’t fight to stand up and get her breakthrough in the Pakistan Television Industry. According to her father, she got her talent from his father and family. She does her work with full dedication and concentration and her acting skills always appreciated by Pakistani people.

She started work in the showbiz industry in 2008 from a drama serial Yeh Zindagi ha on Geo TV that was a very popular drama serial at that time. After that she made a stay of four years, she appeared again in 2012 when she performed in several drama serials from which the most famous drama serials are Mirat ul Uroos and Yeh Zindagi ha. She also works as a model too. She said in her interview when she was not in the showbiz many people told and suggest her modeling, they said my face expressions just like a Model. She started her career from modeling. Momal also appeared in many commercials of different brands. Her attractive look attracts top fashion designers to become a model of their brands.

She also worked in Pakistani Movie Naach where she played dancing roles. Moreover, she also worked in Indian Comedy Movie Happy Bhag Jayegi in 2016. She also produced a movie Wajood in 2018.